Dedicated to preserving “la cultura de las montañas” – the culture of the mountains. 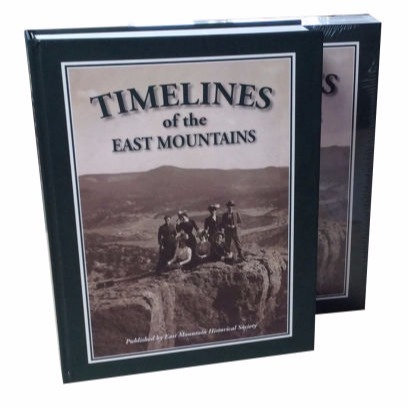 Timelines of the East Mountains

The East Mountain Historical Society is now shipping, TIMELINES OF THE EAST MOUNTAINS. This literary monument to vanishing places, long-held traditions and the people who settled this broad landscape gives an in depth look at this unique region and its history . Over 700 pages and includes over 350 photos.
SHIPPING NOW! Orders yours today.

HARDCOVER IS TEMPORARILY OUT OF STOCK ORDER SOFTCOVER 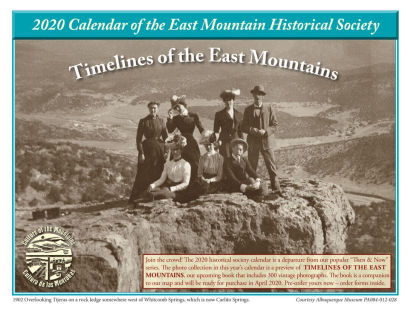 2020 Calendar - Timelines of the East Mountains

Our 2020 Calendar contains is a companion piece to our new publication, Timelines of the East Mountains. Contains vintage images from our new book. 26 pages in full color | Spiral bound

DATE: TO BE ANNOUNCED
TIME: 10 a.m. to noon
WHERE: Located inside the Historic Church in Tijeras 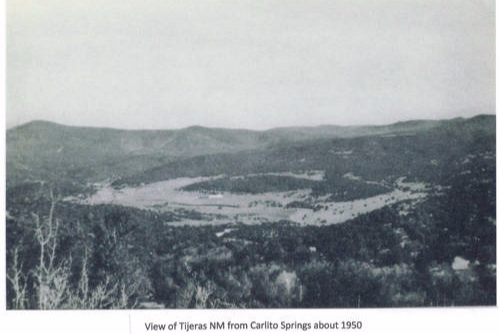 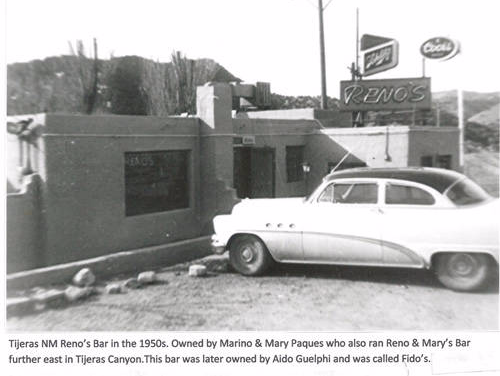 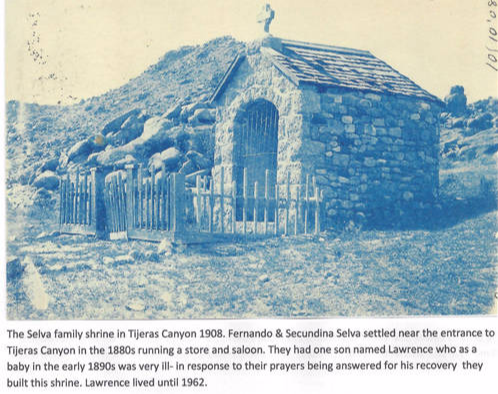 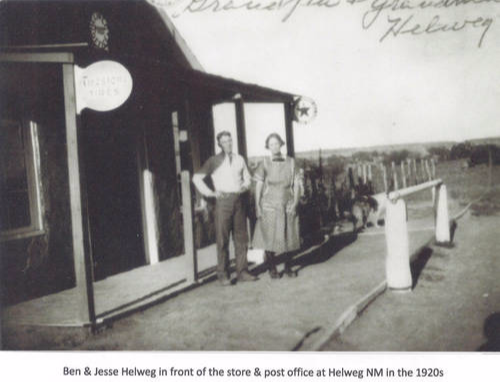 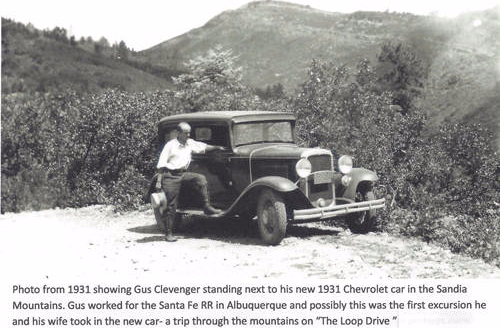 Our volunteer-based organization has chalked up many impressive accomplishments, honors and awards.

A Timeline of our Accomplishments

In 1993, the Society helped initiate and support completion of a historic building survey of the East Mountain area by University of New Mexico professor Chris Wilson. The survey included several places considered eligible for the Historic Register or for Historic District Status. Copies of this report are available for purchase at EMHS public events and through our online store.

In 1995, with a $1,000 grant from the New Mexico Endowment for the Humanities, the Society copied about 200 old photographs loaned by members of 23 East Mountain families as part of a preservation campaign and future historical exhibit.

In 1996, the Society secured a $4,000 grant from the New Mexico Endowment for the Humanities to print photographs and create a 12-panel exhibit describing East Mountain history and culture. This portable exhibit has been displayed in the old Santo Niño Church in Tijeras, the Cañon de Carnue Land Grant Hall, local community centers, the Tijeras Library, and in schools and other community sites.

In 1997, the Society, in cooperation with the Village of Tijeras, applied for and secured a grant for transportation enhancement funding under the Intermodal Surface Transportation Efficiency Act (ISTEA). The $32,000 grant was used to structurally renovate the Tijeras Historical Church (Santo Niño). EMHS had used Santo Niño in the early 1990s for historical and cultural exhibits, and EMHS volunteers participated in cleaning and repairing the old church.

The Society and its members have been involved in the preservation and protection of archaeological ruins located on or near the Sandia Mountains, including those at Paa-Ko. Significantly, the Society was part of a coalition, led by member Louise Waldron, which worked tirelessly for the preservation of Open Space acreage at Tres Pistolas in Tijeras Canyon. Ongoing efforts are directed now at the Selva Ruin Site, also in Tijeras Canyon. Most recently, the Society actively served as part of the coalition that helped convince state and local representatives to purchase 420 acres of private land near Cedar Crest, which more than doubled Gutierrez Canyon (Milne) Open Space, an area of historic interest.

The award was presented to Kris Thacher, oral history project coordinator, and Denise Tessier, EMHS president, by noted oral historian Rose Diaz of Origins and Legacies Historical Services. The honor came during a three-hour celebration June 3 honoring the 15 East Mountain-area residents who had shared their life stories through the "Great People, Great Stories" oral history pilot project. The event was held at the historic church in Tijeras and adjacent Luis Garcia Park.

During that event, visitors were overflowing out the church door as each of those interviewed received a binder from EMHS containing a recognition certificate, honorary membership in the East Mountain Historical Society, a DVD of each person's oral history interview and two copies of a full-color booklet produced by EMHS. The booklet featured two pages of photos and a summary of the lives of each of the 15 interview subjects. The participants were also featured in a slide show by EMHS.

Before the presentation, the honorees heard a short talk from Diaz, who in turn honored the East Mountain Historical Society by announcing that "Great People, Great Stories" had been named project of the year.

The project also was noted the following week by the Bernalillo County Commission, when Tessier was recognized for preserving history as a writer and lecturer, including service as president of EMHS, which is celebrating its 20th year, and for helping to launch the oral history project with Thacher.

The oral history project was made possible via a grant from the county's Neighborhood Association Outreach Grant Program, which was used to train 10 community historians, purchase recording equipment and create the binder, booklet and DVDs. The East Mountain Area Coalition of Neighborhoods agreed to act as sponsor so that EMHS could conduct the project using the grant.

Oral history committee members who conducted the interviews and wrote summaries for the booklet included Thacher, Tessier, Nancy Carpenter, Anabel Sanchez, Beverly Neville, Christine Smith, Jim Hanlon, Danita Luker, and Carol Frederick. Carpenter created the slide show and some of the still photographs for the booklet, which was edited and designed by Melissa Howard and printed by Kathy Rich, all members of EMHS.

Eventually, these oral histories will be made public and archived at the Center for Southwest Research at the University of New Mexico as additions to the East Mountain Historical Society collection. First, however, they must be transcribed, and although the pilot project grant period is ended, EMHS intends to continue conducting oral histories. For more information and for photos about the June 3 event, visit our newsletters page.

Ancestors of the pueblo Indians first settled the East Mountains about 700 A.D., visible remains of which may be seen at Tijeras Pueblo off north NM 337, just south of Interstate 40. Spanish missionaries arrived in the early 1600s, and founded missions at six locations, including Chilili, Tajique, Quarai and Abo. Spanish colonial settlers built estancias (large farm-ranch centers) between Chilili and Quarai. Drought and Apache raids forced a Spanish retreat about 1670, but settlers returned in 1763 to establish a plaza at Carnuel at the mouth of Tijeras Canyon. After a difficult start, more Spanish colonists arrived in the early 1800s, establishing farms and villages on lands north and south along what is today NM 14. A third wave of immigrants arrived in the early 1900s, as cabins were built to accommodate Anglo-Americans from Albuquerque drawn to the mountains for summer recreation and those from all over the nation drawn by the cool air believed to help in the cure of tuberculosis. After World War II, the mountains became a bedroom community for Albuquerque, as commuter homes and subdivisions took shape. Today, the area generally known as the East Mountains is home to more than 10,000 residents.

All Rights Reserved by the East Mountain Historical Society

Disclaimer: No part of this website may be reproduced, stored in any form or by any means, electronic, mechanical, photocopying, recording, scanning or otherwise, without the prior written permission of  EMHS.